My favorite thing so far has been working on the invitations. I know that theyâ€™re just paper and will be circular filed by nearly everyone. But the invitations ended up being weirdly important to me in a way I hadnâ€™t anticipated.

I have a less than ideal family situation. For as long as I can remember, Iâ€™ve craved a feeling of belonging and stability. With DJ, finally having that that was my â€œyou just know, it just feels right.â€ For me, these invitations are the start of the wedding itself. Thereâ€™s the stated purpose, there are our names, thatâ€™s when it will happen. I love that. So I guess Iâ€™ve been dragging my heels on finishing them. Is there a cheerful counterpoint to Penelope weaving and unweaving her shroud? 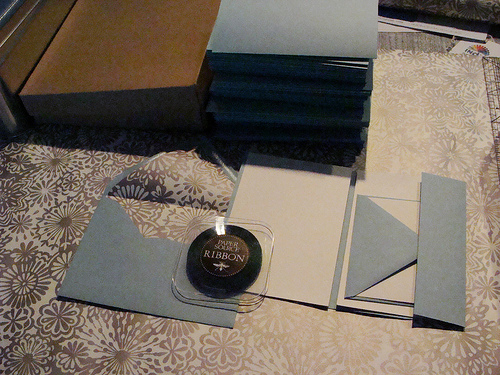 For the folders, I bought sheets of cardstock from Paper Source. One of the tips the very helpful salesgirl gave me was to find the grain of the paper before cutting. I had not been aware that paper had a grain, but itâ€™s important if youâ€™re planning on rolling or folding at all. 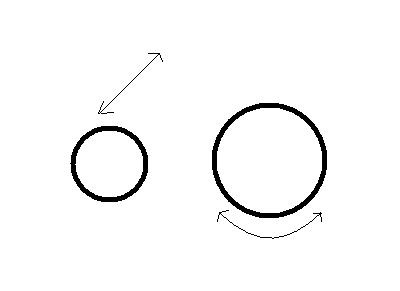 Check for the grain by rolling first in the X direction, then in the Y direction. One axis will have more resistance than the other; in the diagram above the arrows indicate the orientation of the grainline. Small circle = with the grain. Try to orient your cutting template so that the folds are with (not across) the grain – they’ll look smoother.

I cut the rectangles using a craft knife and a self-healing mat with a lipped ruler, then scored them with a bonefolder. 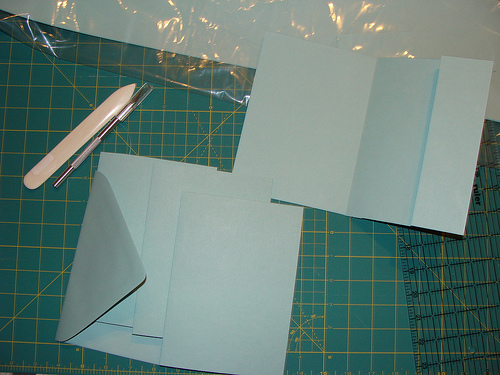 The inside pieces (invitation, RSVP, hotel, directions card) all have the same design at the bottom, which I did in one big run of printing on the gocco. The ink is a mixture of silver and gold (more silver than gold, I think – but I didn’t measure) squished together in a baggie. 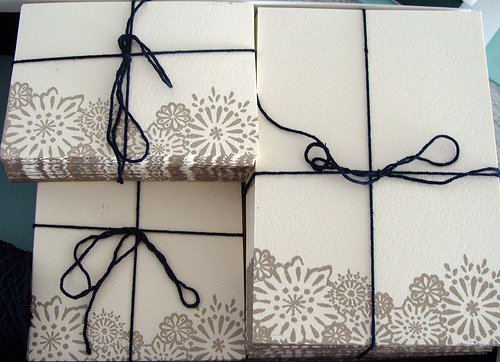 The lacy motif across the bottom of each piece was “made” by me, in Photoshop. Each flower was excised from a scan of the envelope liner wrapping paper through a series of color inversions and selective deletions. It took a while. 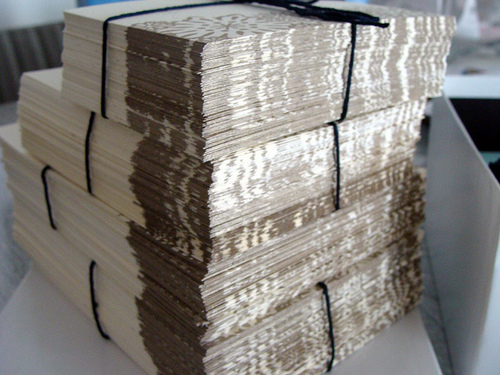 Finally, the assembly! The front of the folder seemed plain, but I didn’t want to make it too busy. I thought about adding more of the pewter design or a monogram or embossing – but ended up wrapping it in Perle cotton, using strips of adhesive on the inside edges to hold the threads in place. The green layer covered that right up, using the same tape to mount it. I haven’t printed the text on the inserts yet, but you get the idea. 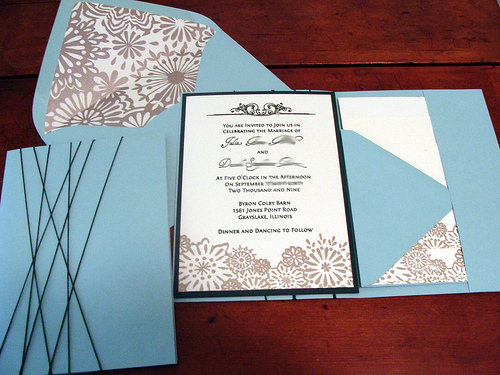 Thatâ€™s it, girls. Thatâ€™s my best project, and it’s not even finished. Youâ€™ll want to throw tomatoes at the next one.

In November EAD held a DIY contest, and E. encouraged me to enter my invitations, still in progress. Oh sure, I said, If I finish them soon! E., I totally did not finish them soon. Ladies- (And gentlemen? If you include DJ and one brother) I finished printing the maps on July 17, the night before we mailed them. Expert procrastinator. Hey E., can I enter now??

Iâ€™m sure youâ€™ve all been on the edges of your computer chairs waiting to see our final invitations! Well, I hate to disappoint, but theyâ€™re not quite ready for prime time. To be honest, Nick and I have had little time to work on them lately, what with showers and parties.

Last we chatted I told you about my reluctance to take the Gocco out of its perfectly packed box. But it had to be done. So I spent many hours reading tips on Weddingbee and right here on EAD. I watched videos on YouTube, and I found a very detailed tutorial on Flickr.

Last Friday I traveled to my parentsâ€™ house with a Gocco, a Xyron, an embosser, 8 lbs. of paper, and a whole lot of anticipation!

I love letterpress, but wedding budgets don’t always allow for letterpress or engraved invitations, particularly in today’s difficult economic environment.Â  For brides still seeking custom invitations, the Gocco (or now the Yudu!) can be an excellent, and more economical, alternative.Â  Some brides choose to go the DIY route, but for brides who don’t feel comfortable DIYing, there are a few invitation studios that specialize in Gocco-printed invitations.

Yesterday was my birthday and after a long search, I finally found and purchased a Gocco as my birthday gift to myself. I’ve basically been on the fence about purchasing a Gocco for a year at this point and naturally, by the time I realized just how much I wanted one they were completely sold out basically everywhere. Oops! Oh well, after some sleuthing and a shout out on my blog and some great tips from my readers, I found one and it is supposed to ship today. Hooray! So in the spirit of all things Gocco, I thought I’d share some of my favorite Gocco inspiration.

Advice From the Pros: Louella Court

We are so pleased to welcome the girls from Louella Court to EAD today for our next Advice From the Pros segment!Â  Louella Press and Two Paperdolls are sister companies specializing in retail stationery and custom designs, respectively.Â  They are based just outside Philadelphia.

Every wedding invitation seems to have a map in it, which I think is a great idea. If it’s functional, it’s a printout from Google Maps. Or it’s art, like Laura Hooper’s maps.

Continuing today’s theme of favors, I thought today I’d talk a little bit about using CDs in your event. There are a variety of ways you can incorporate CDs – as favors, in the OOT baskets for guests to place their photos on and mail back to you, in your invitations or STDs, or as little presents for those people who helped to make your day special. 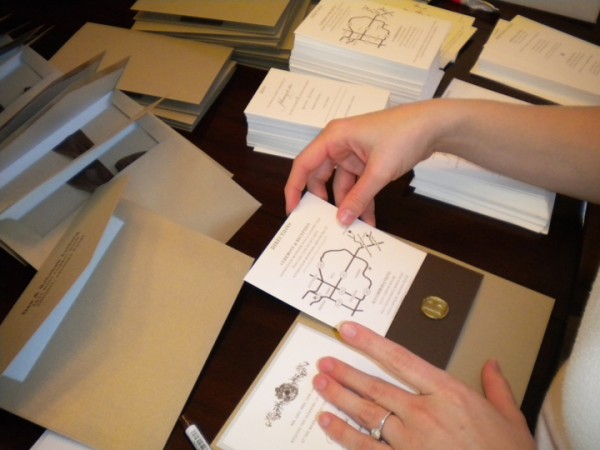 For the longest time I told myself that we would not have letterpress invitations, even though I love letterpress printing. I once had a fleeting dream to go back to school for book arts, but then decided I couldn’t stomach the tuition for art school. I chose library school instead. Books are still involved, but unfortunately no presses or ink or double-sided tape for me. [Random geeky fact un-related to weddings, did you know there is such a profession as a book arts librarian?]

After the churchÂ andÂ reception venue were booked and the dateÂ was set, it was time to think about our Save the Dates.Â  Matt and I were talkingÂ one night and decided that we wanted to createÂ a map chronicling the paths we each took to find each other and where weÂ are now.Â  WeÂ bothÂ wentÂ off to college, moved across the country after graduation, and met as two midwestern kids in NYC before getting engaged and moving to Memphis. And now we were planning a wedding in Louisville.Â Whew.Â  It wears me out to just write it.Â  I mentioned our idea on Pretty Bride and soon Laura Hooper came to the rescue.

About a month ago I made thank you cards. Lots and lots of them. With lined envelopes, of course. I love sending paper cards. Writing them feels a little decadent, and opening the mailbox to a pretty envelope makes my day. Some of my friends send wonderful mail, so I have a set standard already.

Kathy at Merriment Design has outdone herself again!Â  I adore these fabric-backed invitations with half sewn fabric flowers.Â  My favorite part is the creative use of patterned fabric to create several unique designs with the same components.

Invitations Part 5 – A Labor of Love

Our guests will find a lovely treat in their mailboxes this week — our invitations! Finally! I never thought the day would come. Here’s a look at the complete suite, a.k.a. our pride and joy:

I get lots of font-related questions over at Oh So Beautiful Paper, so this week I thought I’d focus on a few of my favorite fonts – specifically calligraphy and script fonts!Â  I’ve also got a few suggestions for serif and alternative fonts (like wood type and slab fonts), but will share those in a future post.

Invitations Part 4 – A (Not So) Sticky Situation

The most difficult step in creating our invitations was not coming up with the design, or choosing the supplies, or even printing with the Gocco … it was finding an adhesive that worked!