As writers and lovers of literature, M and I are excited to be writing our own wedding ceremony to be officiated by my stepfather’s sister. While my stepaunt is a minister, I’ll be perfectly honest in admitting I don’t know much about her faith as we’re planning a ceremony that is largely secular. At this point in my life I most closely identify with being agnostic while M could best be described as vaguely spiritual more so than religious. Simply put, religion does not and never has played a role in our relationship so despite having both been raised Roman Catholic, we knew a church wedding wasn’t for us.Â  What’s most important to us is creating a ceremony that is reflective of our relationship, our personalities and includes as many personal touches as possible. 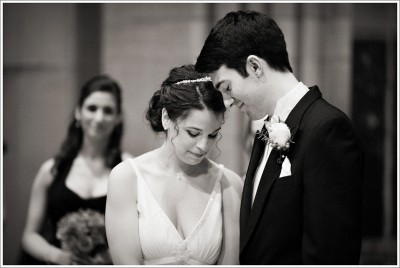 We decided early on to include a couple of readings and asked my grandmother, a published author who has been married to my grandfather for nearly 60 years, to write one of them. We’ve given her essentially no guidelines and are trusting that she’ll write something insightful and touching and hoping that M’s grandmother, with whom he is very close, will be the one to read the words penned by my grandmother. We have also fallen in love with this quote from Captain Corelli’s Mandolin that we hope to have a close friend read during our ceremony –

Love is a temporary madness. It erupts like an earthquake and then subsides. And when it subsides you have to make a decision. You have to work out whether your roots have become so entwined together that it is inconceivable that you should ever part. Because this is what love is. Love is not breathlessness, it is not excitement, it is not the promulgation of promises of eternal passion. That is just being in love which any of us can convince ourselves we are. Love itself is what is left over when being in love has burned away, and this is both an art and a fortunate accident. Your mother and I had it, we had roots that grew towards each other underground, and when all the pretty blossom had fallen from our branches we found that we were one tree and not two. 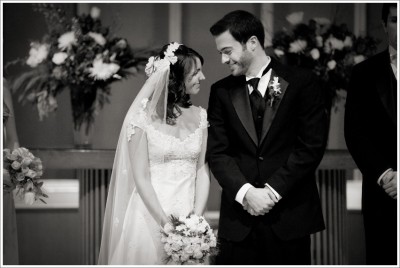 Along with our two readings, we are planning to write our own vows and are considering the inclusion of a handfasting ceremony as we really like the symbolism of being bound together in life from that point forward. My aunt and uncle, who are also my godparents, have been married for 30 years and we’re considering asking them to perform the actual hand binding in recognition of their succesful marriage and our intent to look to them as role models in maintaining a loving and supporting partnership despite life’s many obstacles. Finally, I really love the idea of having our rings passed from guest to guest, asking them say a small blessing or in some way impart positive energy in whatever way rings true for them, although I’m a bit skeptical at the prospect of having our rings floating about. As we continue researching and planning, we intend to pick up a copy of The Wedding Ceremony Planner in the near future, a book that has inpsired many a personalized wedding ceremon in the blogosphere.

Are you planning to write your own ceremony? What traditions and sources have inspired you? 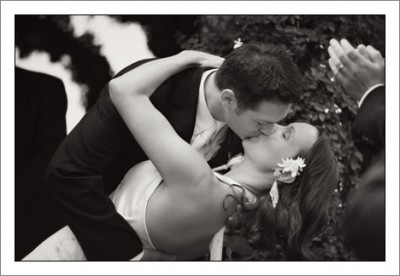 {All photos by one of my favorite photographers, Megan Dailor}

Much like finding our photographer, searching for and finding our venue took place mostly via the internet.

Always on the lookout for what to hang from the ceiling of our venue, a friend sent along a link to Frazier and Wing. How beautiful are these!! I can see them hanging above and around the bride and groom during the cermony, and then scattered around the reception venue.

Dr. dave and I were laughing the whole day of the wedding about my “plans” for the ceremony.Â  I had “planned” this and “planned” that…and the one thing I didn’t plan for, rain, was what happened.

Wedding planning can be so overwhelming. Â I knew so much of what I already wanted, but planning is hard even for someone who read and wrote wedding blogs regularly like myself. Â So I did what most brides out there in blogland did…I went to Snippet and Ink. Â I wanted an inspiration board and this is before I knew how to create my own..here’s what I found…

The Evolution of a Floor Plan

Sorry for the absence in the recaps everyone!Â  I’m really hoping to have my full disc of pictures soon to show you but until then, some logistics!

So now that I had a groom, a dress, and a place to get married, I could finally make my inspiration board! Â I wanted to include specific photos that I used for individual inspiration, but also convey the feel that I was trying to create. Â I actually made about five different inspiration boards as the process went on and the plans took shape, but here is my final product. Â I was going for romantic, warm, classic, and simple, and the colors I ended up using were ivory and black with gold accents.

In an effort to take you through my planning process, I will attempt to narrate in the order in which things actually occurred. Â After getting engaged and determining that the wedding would take place in Atlanta, we knew we had to start by choosing the ceremony and reception locations. Â Neither Ryan nor I was currently a member of any church, but we knew that we wanted a Catholic ceremony. Â Therefore we did what other lazy couples do on Saturday night – map out the closest Catholic church! Â And the first church in our search, amazingly enough, was the Cathedral of Christ the King.

Hi Everyone!Â  I am so, so happy to be back blogging here at EAD – and I just want to start off with a huge “thank you!” to Ami and Rebekah for inviting me to join them as a weekly columnist for the EAD Wedding Blog.

Last week I wrote about the overview of the day, how we hope it will pan out. We now move on to filling in some of the details in more depth. As the wedding is still over 4 months away, some of the details are still in progress but I will start with the things which are pretty much sorted.

An overview of the day

First of all, hope everyone had a great holiday break and Happy 2009. I am very excited to be in 2009 and there is now only 5 months to go until our wedding day.