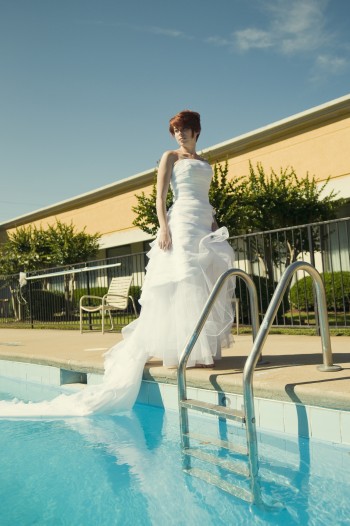 My friends Nick and Linden took a trip south for their one year anniversary and brought Linden’s dress along…to trash. We didn’t set her on fire or roll around in mud or a marsh, nor did we splatter paint everywhere. Not to say that she’s chicken, at all. She braved a cold hotel pool, a shopping cart, and cut the bottom of her dress to pieces. All in the name of art. It was so fun and she wished she’d cut her dress short to begin with, before the wedding. Which makes me want to challenge someone who has Project Runway caliber sewing skills to modify their dress inbetween the ceremony and reception. If I had a few years instead of months before my wedding I would love to have someone teach me to sew, make my dress, then shorten it for the reception.

I’m wondering if any of you are deciding to “trash” your dress and your reasons why.

I love the concept and I am definitely interested in a day after shoot, but I don’t think I’ll be able to render it unwearable/uncleanable. I will say, if it helps, that only the bottom of Linden’s dress really got dirty during the process, and it was comparable to what I’ve seen after an actual wedding. Plus, she didn’t care so there was no lifting of the dress as she walked around, she just let it drag. I’m pretty sure a good dry cleaning would’ve taken care of it. How far would you be willing to go to get awesome shots? I doubt I will really trash my dress, and it doesn’t lend itself to cutting, but I know my daughters wouldn’t want to wear a dress that was great in 2009 just like I’m not hopping into my mom’s pink 1970s number for anything other than fun. 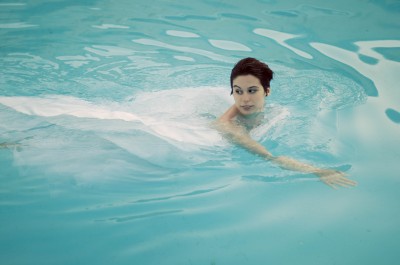 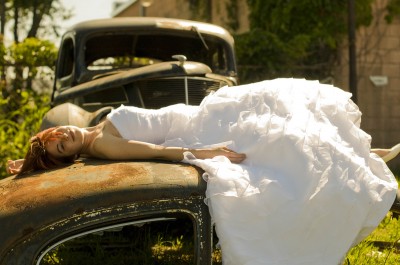 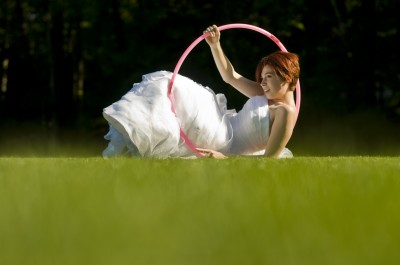 And the cutting of the dress…. 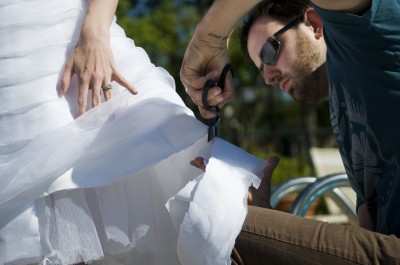 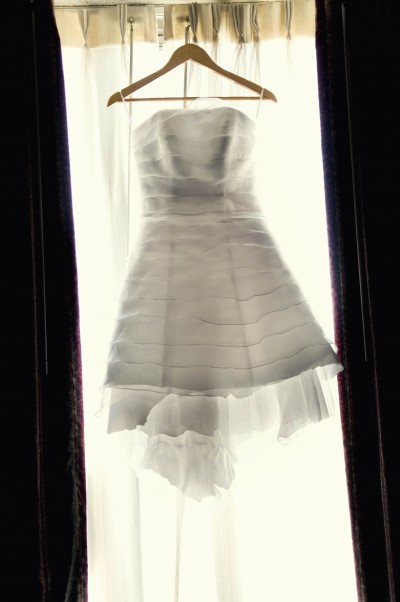 Linden’s thinking about having the seam professionally refinished, dying it pink, and wearing it out. I think she’s awesome for such a choice. 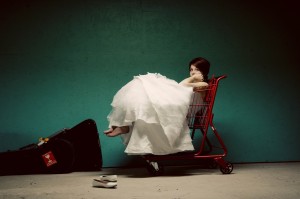 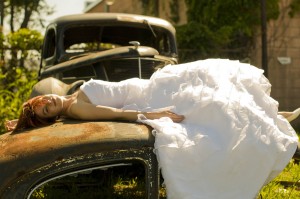 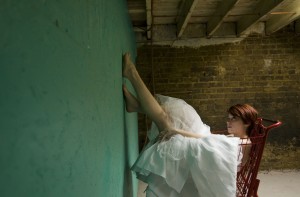 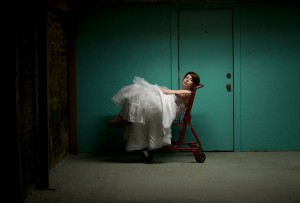 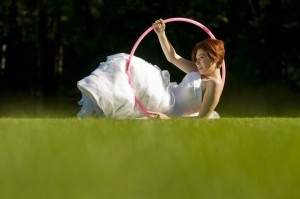 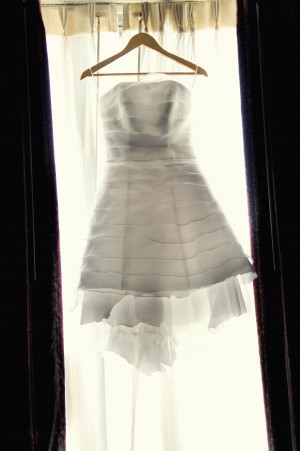 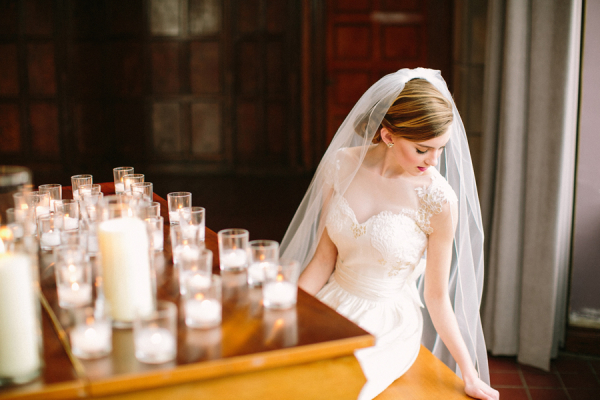 There’s nothing more mesmerizing than bridal fashions with Old World sophistication and gorgeous details, and these stunning images from Arielle Doneson Photography confirm that! Captured as a look book for Something White bridal boutique near Cleveland, Ohio, at the equally glam The Tudor Arms Hotel, these gowns and veilsâ€”especially all of the lovely laceâ€”leave us drooling! We adore the vintage look of the surroundings, complemented by pieces from Borrow Vintage + Eclectic Rentals. Baci Designer created the stationery for this shoot, and oversaw the styling of the entire day. We feel as though we’ve been transported to another era! 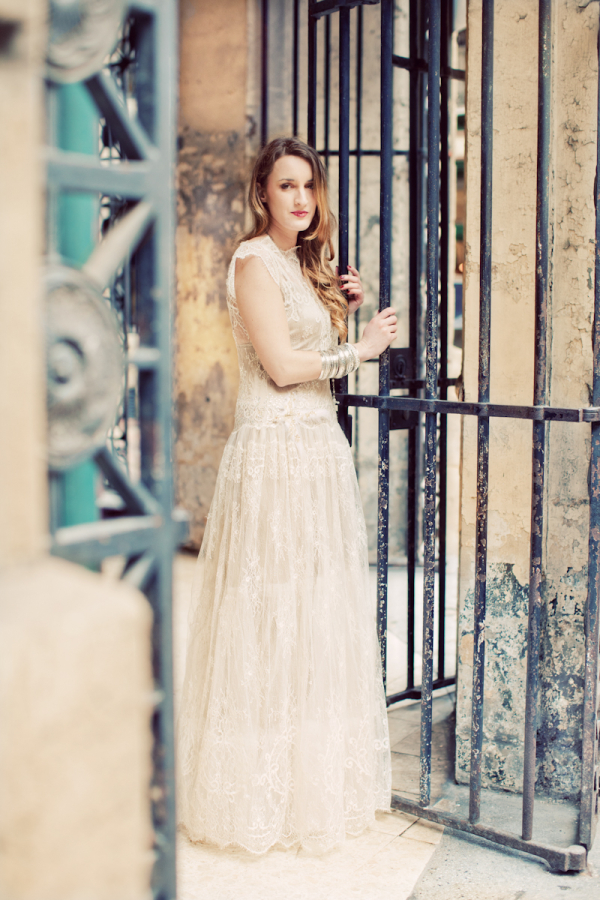 This lovely inspiration shoot from Shoot In Love Photographie is perfectly elegant and ethereal, which speaks of its setting in Bordeaux, France. The bouquet, dotted with blush and cream flowers and a lace wrap, is from Fleurs de Mars Artisan Fleuriste. We absolutely adore the casual silver bracelets from H&M and Claire’s, paired with the model’s cream lace Manon Pascual gown, and a pair of T-strap Zara wedges pulls the ensemble together. This effortlessly chic style is the perfect mix of bohemian and sophisticatedâ€”see all of the gorgeous images in the gallery! 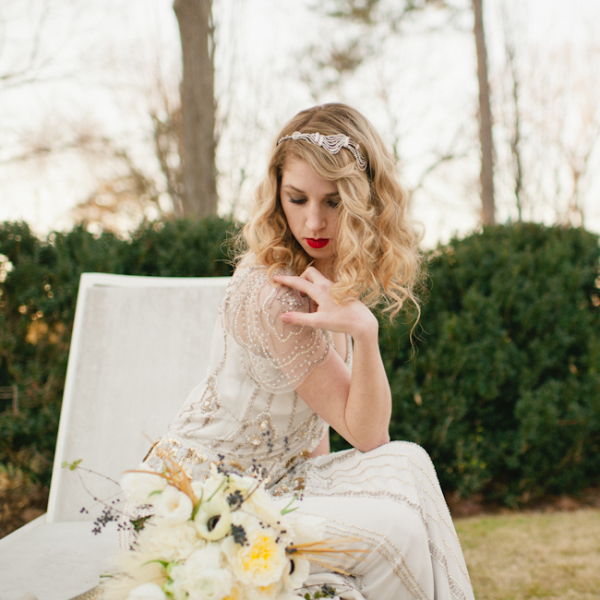 This Art Deco wedding inspiration shoot from Spindle Photography is just absolutely stunning! Inspired by the 1920s, designers from Mariee Ami in Birmingham, Alabama, joined forces to create a sophisticated, sparkly backyard party. Cloth of Gold Flowers used a palette of mostly white with hints of green and gold and even white feathers for arrangements, while Uprising Custom Cakes created a blue confection with gold detailing to complement the theme. Elegant and intricate gold and silver table settings from Table Matters rounds out the look. But the crown jewel of the affair is the Jenny Packham gownâ€”with gold accents, beading, and rhinestonesâ€”that’s breathtaking. Everything about this soiree is perfection, like a page out of The Great Gatsby!

Are you kidding?! We are just stunned beyond words over this whimsical garden tea party shoot fromÂ Ruche and This Modern Romance! Featuring pastel, vintage-inspired dresses and accessories from the Ruche spring line, fun prints, patterns, and even a few sequins dot the Alice in Wonderland-style landscape. We’re really loving the oversize floral hair pins and bold colors on the funky shoes. These photos are deliciousâ€”just like the colorful spread of cakes and macaroons from Sweet and Saucy Shop. See all of the beautiful new spring dresses and accessories in the gallery!

Kelly from Spindle Photography is an up and coming photographer who is no stranger to EAD (you can read her about her 2009Â nuptialsÂ here). She sent over a sweet engagement session in Atlanta’s Piedmont Park. Cassi and Matt are planning a 2011 wedding ceremony.

Kristen from Kristen Steele Photography and Tiffani from Creative Design Events sent over this gorgeous bridal session they put together using gowns from Priscilla of Boston, one of my favorite design houses.

The Blessing: Just Before

The moments (how short they were!) before we ran (walked briskly) into the church to be blessed by a priest (Epsicopal, not civil, if you’ve been keeping up):

The Blessing: Getting Ready!

So, on the big day (third big day if you’re counting), I had a bridesmaid tea with my ladies and our mothers & grandmothers and then we were off! And running behind. I think I took the whole “getting married beforehand means less stress” thing too seriously, and the tea didn’t get kicked off right on time so we were a little rushed but once we made it to the chapel things felt great.

S + A: Getting pretty details 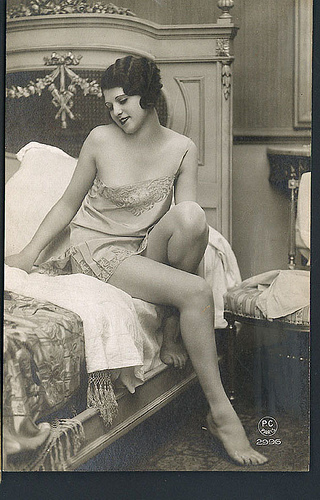 A picture is worth a thousand…dollars?

If you have been following me you know that photography is very important to me. Particularly because it’s my love and my livelihood. When I was deciding on my budget I knew photography was going to be a huge part. As a blogger and wedding fanatic I am constantly surrounded by gorgeous images from ridiculously awesome weddings and photographers and it certainly inspires me to do something fun and ‘me’ for my own wedding! It also makes me hyper aware of what is out there, how much things cost, how gorgeous a wedding can look (even on a budget!), and how amazing some photographers really are. 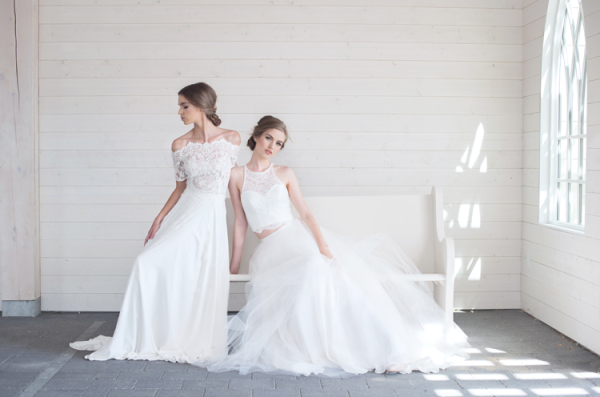 We just returned from a fabulous week in NYC for Bridal Fashion Week, where we were introduced to new collections and offerings from the best of the best in wedding fashion. One of our favorite new lines? Lillian Wild‘s “Create” Collection- a customizable collection that is the epitome of modern, classic simplicity. With a set of gowns each named after peonies (swoon), the Lillian Wild lookbook showcases separates, underlays and overlays, and dresses, designed to flatter every bride. Select from five laces, three linings, and multiple cuts and styles, to create a bridal look as unique as you are! The collection is expected to arrive at retailers all over North America in the new year, and is now available in the Lillian Wild Bridal boutique in Kelowna, BC. See the entire lookbook here! 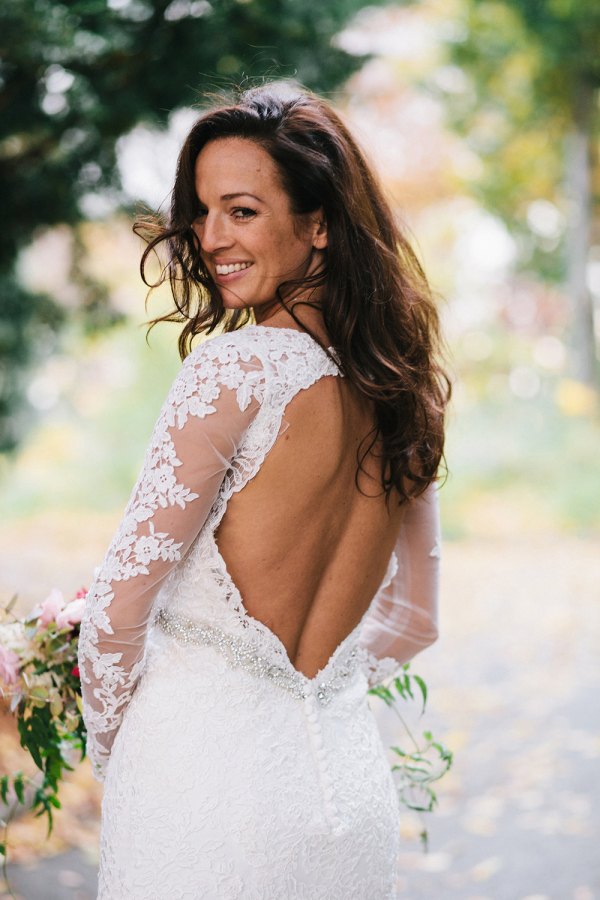 Our hearts are aflutter for the beautiful documentary photography byÂ Carey MacArthur. At its heart, photography is about preserving memories, and this is what Carey does so well. Her powerful images are able to transport you into the moment, capturing the storyÂ as it unfolds. Carey makes a genuine connection with her couples and brings aÂ wedding to life by documenting the day with the same care and compassion that two people have for one another. From capturing the small, personal details toÂ celebratingÂ the important moments, Carey’s documentary photography style insures that each part of the day is recorded with elegance and simplicity. Carey is based in Brooklyn, NY, but travels the world makingÂ images of couples in love. Visit her EAD Vendor Guide portfolio and Instagram to view more of her gorgeous work!

If you are a bride-to-be getting married in 2016 and have been dreaming about finding a fine art film photographer to capture every single moment and detail to perfection, then you are in luck because the ever so lovely and talented Brittany Lauren Photography is giving away free wedding photography to one lucky EAD reader! 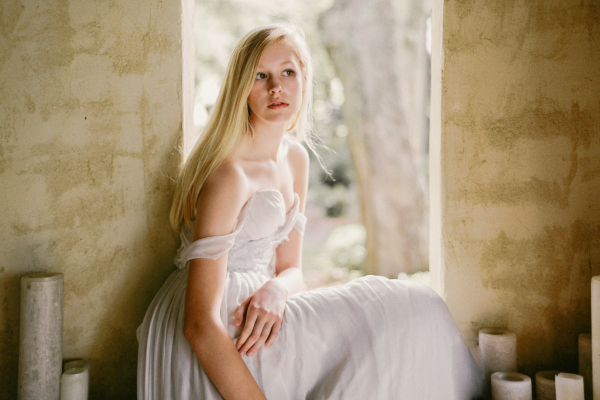 South Carolina’sÂ River Oaks CharlestonÂ was the perfect backdrop for this gorgeous bridal storyÂ captured byÂ Exquisitrie by Kelly Sauer. Though set in the Lowcountry, the shoot evokes the romance and history of Europe, with the Old World textures of River Oaks and magical Ivy gown fromÂ Saint Isabel Bridal. Bridal portraits always seem to tell the story of “waiting” – preparing dreams of the wedding day, holding bated breath, settling in to begin the story of married life – and this feeling is perfectly encapsulated in the stunning images directed byÂ Kelly Sauer Ltd. Co.Â We are positively smitten! 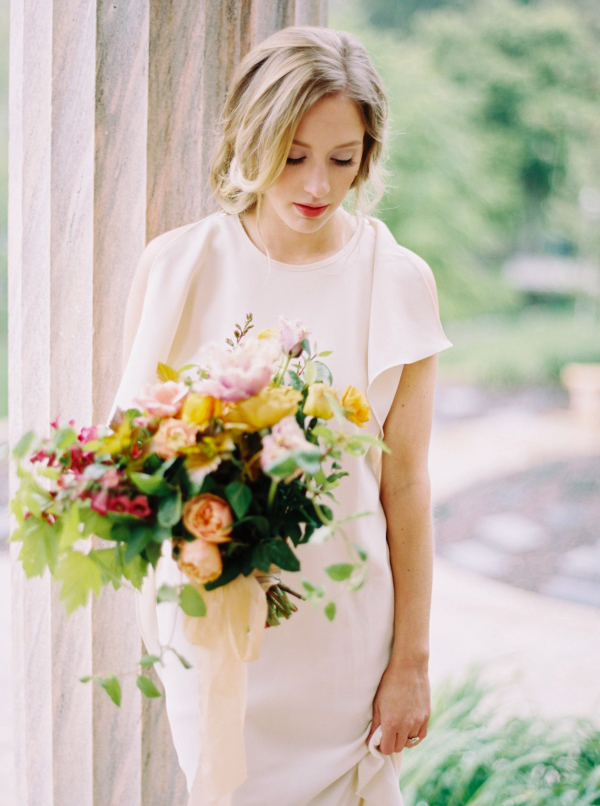 It’s been a year since Christian and Susie wed, and on a rainy Utah afternoon they gathered together withÂ Mariel HannahÂ for a romantic anniversary shoot, creating beautiful memories to celebrate their first year together.Â Flower AfternoonÂ created perfectly styled blooms for this magical set of imagesâ€”we are swooning over the lush marigold, pale coral, crimson, and green bouquet.Â Kali ChrisÂ styled Susie with the most lovely sideswept updo and soft makeup. We’re so in love with the love these two share as captured byÂ Mariel Hannah!

Pardon us while we gush a bit about the exquisite talent that is Jessica of Jessica D’Onofrio Photography. Jessica’s images are full of light and love and the way she captures emotion is pure and natural. Every photographer has a specific style all their own, and we’d describe Jessica’s as feminine and timeless. There’s a sweet simplicity in her fine art photography that captures romance in an authentic way. Jessica is based in Southern California, but travels wherever your wedding takes her! Visit her website, blog, and vendor portfolio to see more of her gorgeous images!

Your wedding day is made up of so many perfectly unscripted moments, each over in an instant. Photography is about capturing these flashes of time, and that is exactly what Rachael Shirano does so well. Her work is so beautifully raw and real, each frame reflecting the emotion of the event inside. Rachael is based in Central IllinoisÂ and is able to capture both the modern ChicagoÂ wedding, rustic Midwestern soiree, or destination wedding with flair. We simply love Rachael’s images, each filled with light and love, and are thrilled to introduce you to her portfolio!

It’s safe to say that we are completely smitten by Allure Bridals. Featuring impeccable design and craftsmanship, their gowns are the epitome of the romantic, elegant style that we love (EAD brides love them too, check out all of the amazing real weddings featuring Allure gowns!). Their Spring 2015 collection is all that and more, showcasing modern silhouettes with exquisite detailing like stunning lace, embroidery and beading. These gowns are a fresh take on classic bridal design, pairing dramatic backs and floral appliques with on-trend features like illusion necklines and pretty cap sleeves. If you’re looking for a truly remarkable gown that will look as fashionable today as it does in photos decades from now, Allure Bridals will have you feeling like the belle of the ball on your wedding day! 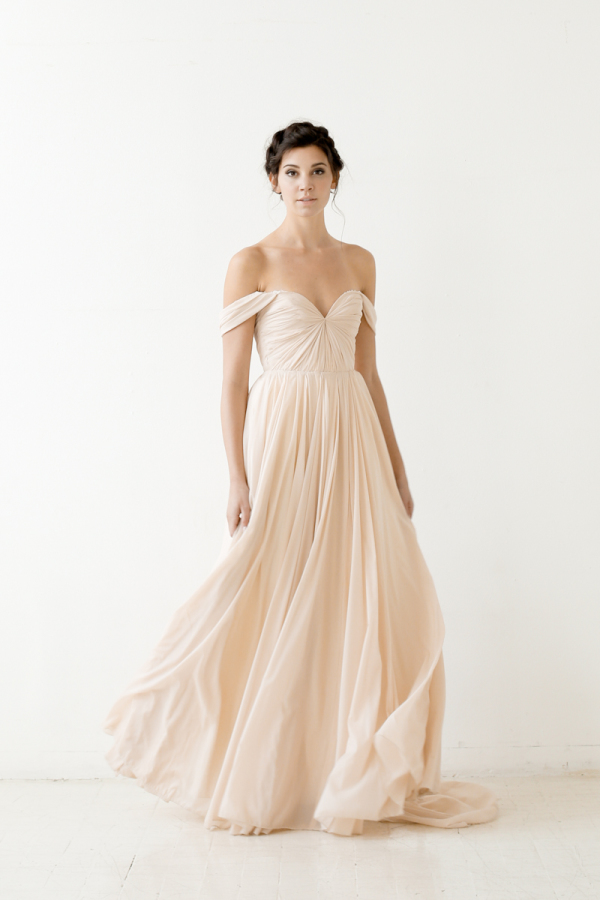 We are so excited to unveil the upcoming Fall 2015 collection from one of our absolute favorite designers, Sarah Seven! Sarah Seven is known for their ethereal, elegant gowns, and this set of frocks is undeniably stunning! The new collection features not only beautiful gowns (our favorite? The positively gorgeous Lafayette.), but alsoÂ bustier tops, camisoles and rompers that can all be paired with the collection’s skirt styles!