So, after an email from Revlon asking if any of the EAD bloggers would be interested in testing out eyelashes and artificial nails, I ended up with maybe 12 sets of false eyelashes and 4 packs of fake nails (and I love mail so I got quite excited) to my door. I was thinking we could do some big photoshoot with some Birmingham girls, especially recent brides or soon-to-be. I decided I should also test them out myself, so I started by wearing a pair last weekend at a wedding I was shooting. I should probably start off by saying I have only worn false eyelashes one other time, for halloween, and I can’t remember for sure but I think they were adhesive (as opposed to glue). The eyelashes I’m testing come in various styles, and the first I tried was “Intensifying” because they seemed less wild than some of the other pairs. The sub-title of the lashes is “fantasy lengths” so I guess they are meant to be a little more than your average lash. 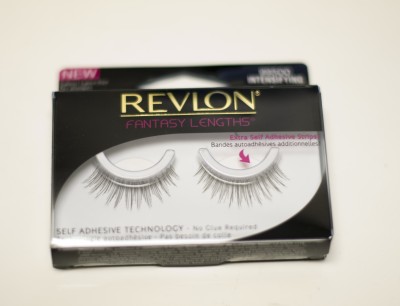 The pack comes with an extra adhesive strip so that you can get 2 wears out of it, a pseudo-unexplained eyelash applicator (it’s a little plastic rounded piece that I think should help you secure the lashes to your lash line), and has a left and right label. I apparently forgot about the labels and put them on backwards at first. I switched them, which I think voided some of the adhesive effectiveness. So, what did I think?

Probably because of my misuse, one corner kept coming up and annoying me. I had them on for about 18 hours, and by the end of it my eyes were building up a lot of protein. I wear contacts and the constant touching of my eyes I did might’ve caused it. I will say that when I put them on the wrong eyes they felt really secure, so I think they would’ve performed better if I hadn’t had to switch. I liked how they looked, they would definitely have seemed unnatural to people that know me but I think in general they just looked great! My favorite thing about them? The adhesive makes for a permanent eyeliner line. Eyeliner always seems to rub off or run under my eyes so it was nice to always look like I just applied it. Here’s an artsy close-up: 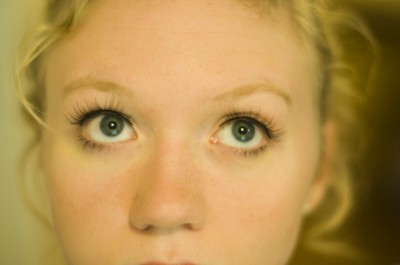 Just to see how the adhesive would do for a second wear, I wore the pair again yesterday. I reapplied the lashes to a second strip of adhesive and put them on. I don’t think I did the best job of applying them to the adhesive, and during the day the adhesive often stuck to the fold in my eyelid. I certainly couldn’t give a full review of the lashes at this point, because I’m apparently a giant spaz. However, this has brought to my attention that if you are planning to DIY your makeup and are considering applying false lashes, you should be prepared to buy several pairs and test them out more than once. I would say for sure that on your big day if you are using the adhesive kind you should use the first strip, since it’s already attached and more secure. I’ll let you know how I feel about the glued ones in future posts. All of the products I have to test are Revlon.

Other things to consider if you want false lashes but are too afraid to DIY: MAC has false eyelashes that they sell and we’ve had a few clients get their day of or portrait day makeup done there for the minimum purchase price (not sure how much it is). They use glue and since they know what they are doing, they’re probably pretty secure. I’d still have a trial since you might have sensitive eyes and your wedding day is not a good day to want to scratch your eyes off.

What are your experiences with false eyelashes? Anyone going for extensions or that new latisse product? 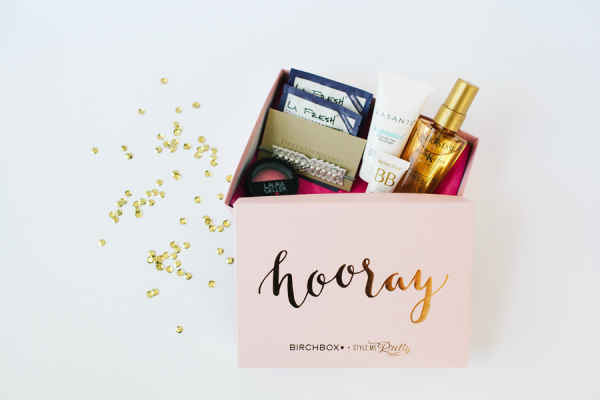 The “I Definitely Do” Birchbox

We’re so excited to introduce you to the fabulousness that is Birchbox, and even more thrilled to announce the very first Birchbox and Style Me Pretty collaboration, curated especially for the wedding party, the “I Definitely Do” Birchbox! We’re absolutely loving Birchbox: in a nutshell, a subscription gets you a monthly box of goodies, filled with beauty and grooming samples customized just for you! This is a perfect gift idea for your bridesmaids to thank them for being amazing additions to your wedding party. And men, just so you don’t think you’re being left out, there’s a Birchbox Man option tooâ€”perfect for any groomsmen! 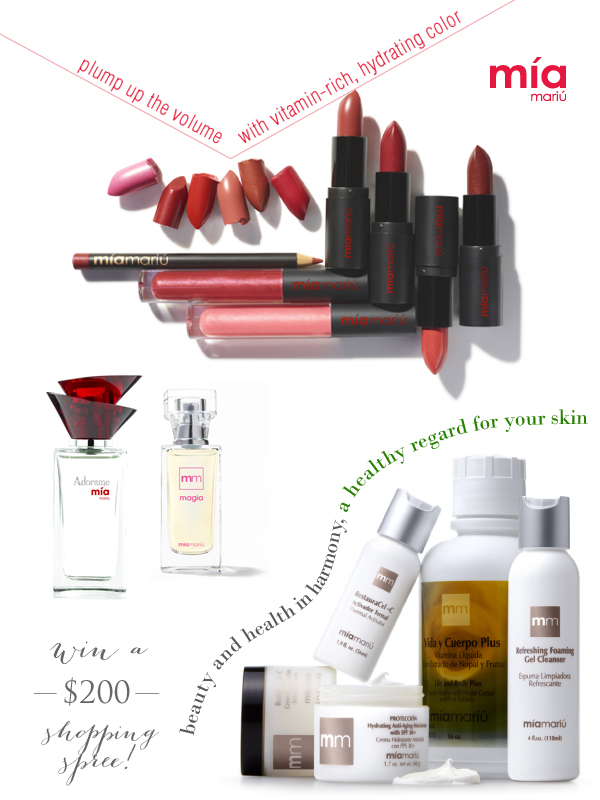 We are so excited to introduce you to MÃ­a MariÃº! A cosmetics company that believes in beauty and health in harmony, MÃ­a MariÃº‘s line of health and beauty products are based on three principles: Detoxify, Nourish, and Protect. From their anti-oxidant powerhouse Hydrating Moisturizer to their Luminous Lip Gloss, we are in love with their philosophy and products!

Our Nebraska Wedding: A purple garter and some cuff links

Our Nebraska Wedding: Getting Pretty!

After we finished getting our hair done, it was time to head back to the hotel and complete the look!

Our Nebraska Wedding: The Day Begins

I tend not to sleep well when I am reallly excited about something the next day.Â  Somehow though…I slept amazingly well the night before our wedding!Â  Waking up bright and early, refreshed and beyond excited to get the day rolling!

I woke up the morning of our wedding day at 6:30 to sunny skies and my mother playing “I’m Gettin’ Married in the Mornin'” from My Fair Lady. It was a a beautiful day! After a shower and some juice the girls started showing up. Before I knew it, our hairdresser and makeup artist were already there and the preparations had begun! Our incredible florist, Sarah of Allium Design, dropped off the bouquets (3 bridesmaid, 1 flowergirl, and me!) at 8:30 before heading to setup the venue. I was floored at how beautiful they were! I think this was crying session #1 for my mom and step-mom?

Mo+Boy Tie the Knot: Getting Ready

When our photographer showed up at 2 PM sharp, my hair and makeup were already done and I was picking up trash from lunch whileÂ The Runaway Bride was airing continuously on TBS. I think “wedding” and see visions of white peonies, velvet furniture, a gaggle of bridesmaids, someone very official holding a clipboard and a headset, perhaps a harp player, and a large window streaming in light so that the bride can bask in its warmth before she goes and whispers those romantic two words: “I do”.

The Chinese Banquet: The Cheongsam, Getting Pretty and Portraits 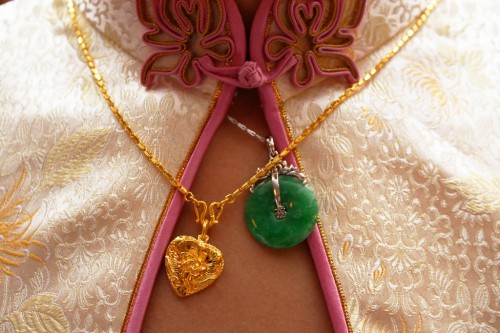 {The collar of my dress for the Chinese Banquet. The gold heart is from my in-laws, the jade is from my grandmother. Photo by my sister}

Morning of the Wedding

I woke up thirty minutes before my alarm went off at 6:30am, looked out the window, saw the rain, and to my surprise sprung from bed un-phased shouting with glee, “It’s wedding day!” Â See, I ALREADY knew there were going to be scattered showers (what bride doesn’t check the forecast beginning ten days ahead?). And over the past 30 years, I’ve learned that there are two things I can’t control: my age and the weather. Â So be it!Â  It was still a warm summer day and in the end turned out to a beautiful evening, so I am happy I let it be.

On the anniversary of the day Brian proposed, Angela Stott, the masterful photographer who shot our wedding, sent us the link to our wedding album online. Great timing, right? We spent the evening remembering our wedding day â€“ it couldnâ€™t have been a more perfect way to celebrate the day we decided to become husband and wife.

A Honeymoon, Some Lanterns, and Hair Candy

With four months to go, we’re moving full steam ahead! Here’s a post to catch you all up on what’s been happening in my neck of the woods.

The Blessing: Getting Ready!

So, on the big day (third big day if you’re counting), I had a bridesmaid tea with my ladies and our mothers & grandmothers and then we were off! And running behind. I think I took the whole “getting married beforehand means less stress” thing too seriously, and the tea didn’t get kicked off right on time so we were a little rushed but once we made it to the chapel things felt great.

Becoming a Bride on a Rainy Day

Yes, I woke up to rain on my wedding day. Every bride’s worst fear. I laid in bed for 20 minutes, listening to the raindrops hit my window, but I felt surprisingly serene.

Although I love fashion and adore shopping, wedding dress shopping was a different story. It took me a while to actually want to go dress shopping, but when I went, it was easy and fun. My mom and I met in Nashville (halfway between Memphis and Louisville) and I had made three appointments. The first was at The Bride Room and although I didn’t ultimately get my dress there, the experience could not have been better. I recommend it to anyone in the area.

Your Colors are PINK and PINK

There was another bride at the salon for my hair trial – she was with her mom and bridesmaids. They were sipping mimosas and enjoying bagels with the stylists, taking turns having their hair done. The bride had a pretty veil and really cute short hair, super shiny and full of volume. There she is in the corner behind me – bride and bride-in-training.

I have straight hair.Â  Thick, fine, long straight hair that doesn’t hold a curl for more than ten minutes.Â  Oh, also I twirl my hair so if there are any stray pieces on my wedding day they will end up being long, straight, strings hanging from my head – boy, doesn’t that sound attractive!Â  And to make matters worse, I have never successfully had my hair “done” by a professional – they always underestimate the amount of hair/type of hair I have and it ends up looking a hot mess.

I’ve put my face on a beauty regimen, which is something I have never done before.Â  I’ve always had pretty clear skin, which means that I totally neglect my face (I’m ashamed to admit that I used to only wash my face in the shower, even if I had been wearing makeup – yikes!).Â  I always felt pretty okay with this system because I never really wear make up (out of laziness mostly – if I know there are going to be pictures taken, I wear makeup, that’s pretty much the only thing that will motivate me – I mean, I need to look good on Facebook, right?!) and I’m diligent about wearing sunscreen.Â  I just didn’t see the point in spending a lot of money on something I thought I didn’t need.

Do I Need More Hair?

After being unsuccessful at finding a hair and makeup person to return my emails, I luckily found Uyen Tran and had a fantastic trial! She spent three hours with me and I’m so happy with how the trial came out.

I just wanted to let you know, in case you wake up to a zit somewhere dangerously close to the big day, that I found something that worked for me!

I’m going with lipcolor #1. To refresh your memory: