Ed Note: I’m beyond thrilled to welcome another EAD Weddings bride blogger into the fold!Â  Natalie is absolutely adorable and I know you’re going to love getting to know her and reading and commenting along as she plans her November 2009 North Carolina mountain wedding!

Hi EAD readers!Â  I almost can’t believe I’m here blogging to you – I have been religiously reading EAD (and seemingly countless other wedding blogs – I’m obsessed!) and it’s nutty that I’m on the other end now, but I can’t wait to hear all your thoughts and ideas about my upcoming wedding.

To start, let me share with you where the title comes from (just in case you aren’t as obsessed with When Harry Met Sally as I am): When Harry Met Sally – the Couples.Â  I just love the older couples talking about how they met… plus Brian secretly (well, maybe not so secretly) thinks I have some similarities to Sally (especially the restaurant ordering).

Now, let me tell you all about me (well not aaaaall about me – if you want more goodies, check out my blog I think I might beÂ a grown up…).Â  I moved around a lot growing up (my dad’s a doctor in the Air Force, which – along with his love of change and all things new – was the reason for all the moving) so I don’t really have a hometown.Â Â  For college, I came all the way fromÂ Northern California to a small (top ten!) school in North Carolina (a state I hadn’t lived it yet!), Davidson College.Â  Not only did I fall in love with Davidson (I work here now), but I fell in love with Brian at Davidson – talk about being happy I took a chance on a school I had never heard of! 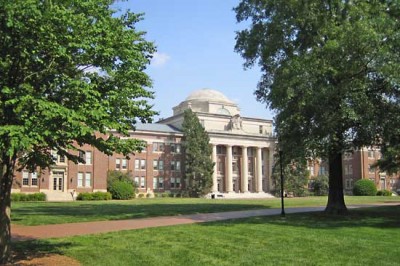 Now for the boy: Brian.Â  Brian is from Louisville, KY and has lived there his whole life.Â  He played baseball at Davidson (and double majored in math and economics – yes, I am bragging) and was drafted by the LA Dodgers after he graduated.Â  He finished last year on their AAA team before having Tommy John surgery last August.Â  He’s spent this season rehabbing at the Dodgers spring training facility in Arizona – he started a blog, too, but his is more for the grooms than the brides (unless you’re really into baseball or Brian’s random thoughts, which actually are pretty entertaining…). 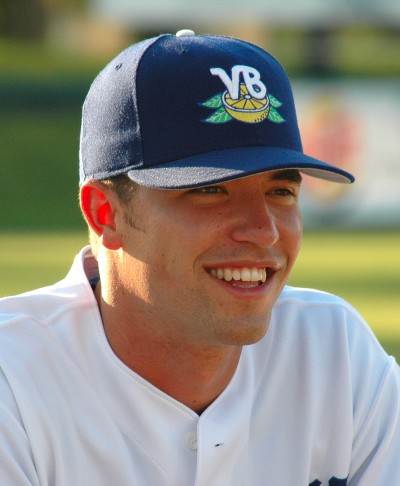 Brian and I meet early my freshman year at Davidson (his sophomore year), but didn’t start dating until April of that year.Â  This was partly due the high school boyfriend I had when I came to Davidson (Brian was very respectful) and partly due to Brian’s shyness/nervousness which always kept him from saying more than a few words to me at any one time (one of Brian’s friends/teammates who was dating a friend of mine was the one who finally told me Brian liked me… thanks, Tim!).Â  After a few months of hanging out in his dorm until all hours (don’t worry, we sat on opposite ends of the couch most of the time and he would give me the “two pat” when he was really feeling brave), Brian got up the nerve to kiss me and we’ve been together ever since! 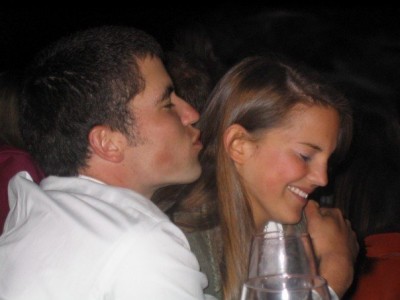 Now Brian and I are planning a November wedding in Cashiers, NC (a small town in the mountains of Western NC) – time has really flown by since freshman year (even though it doesn’t really feel like it has!), but I can’t wait for all that is coming up next!

“Itâ€™s time,” I declared to my husband just days after our wedding. “We have waited long enough.Â Â Weâ€™ve been trying for years but for one reason or another it just never happened.Â Â Can we please start our family now?” I begged.

An Update and My Inspiration Board

Whew! To say that I’ve been overwhelmed recently is a bit of an understatement. A quick update of the last month:

The Story of Grandma and the Mustard

This entry is subtitled: Why I’m Freaking Out About Our Food at the Reception

You Want to Hear About My Wedding… Really?

It occurred to me today at the doctor’s office…that when you are engaged…you can easily have a conversation with just about anyone…and at any time.Â  Of course the subject of discussion is… the WEDDING!!Â  Why is it that all of a sudden I feel like the lady at the bank that helped us set up our joint account wants to have us over for her next dinner party??Â  And does the pharmacy tech really care about what flowers I’m going to have on the cake table?? 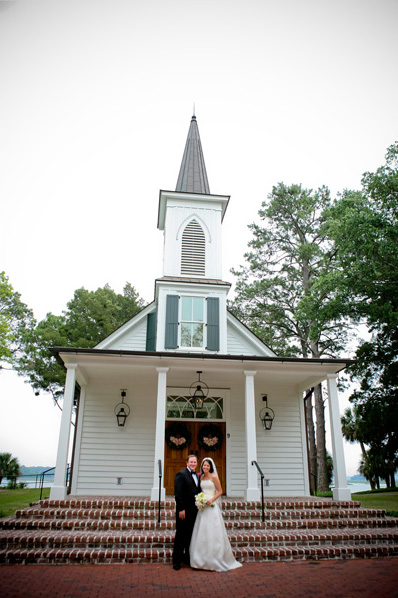 I’m a South Carolina girl at heart, so I simply adoreÂ Kacie and Darby’sÂ wedding, set at one of my favorite venues in the world, the Inn at Palmetto Bluff, and photographed by the incredible Nashan Photographers.

Sometimes when I’m roaming wedding blog land, I am amazed at what bridal bloggers can do in their spare time. How do they keep up with their wedding and have a full-time job? How did they make their own wedding dress and stay sane? What do you mean they baked their own wedding cake?? I am so impressed by all the talent out there, so much so that I often feel like bowing in front of the computer hailing “I’m not worthy!”

Is it October already?

I am in total shock that my wedding is just about a month away – where did the time go? September was a total blur – starting with a last minute trip to Paris (I know, pretty amazing), followed closely by my bachelorette and Homecoming at Davidson. Then I had two fabulous showers in Brian’s hometown, and then a work trip to Chicago! And do you think I managed to get any wedding planning in during that time? No. I got back to my real life and had a melt down because of everything there is still left to do…

I still remember the day I learned about Facebook. It was sometime in 2004, and I was walking back to my apartment with my friend Matthew after history class. We were dodging the usual suspects on Telegraph Ave. in Berkeley, when he enlightened me.

It’s finally time to start the much anticipated wedding recaps! Much anticipated on my end, at least. I want to remember every moment, every emotion, every detail. It really is true that the day — the week, actually — will just fly by. And before you know it, you’ll find yourself where I am today: happily married and still marveling in the loveliness that was our wedding day.

And sadly it’s not the good kind of dream… Last night I had my first wedding-related freak out dream.Â  You know, the one where you somehow find yourself at your wedding and you hadn’t finished planning everything (so people are wandering around aimlessly wondering why in the world you don’t have escort cards), your hair and make-up are not done, it’s the first dance and you can’t find the groom anywhere so you dance with your mom?Â  Yea, that one.

Back from Paradise as a Happily Married Woman

Friends! It’s been so long, and I have so many stories to share! August 28th was the most perfect day of my life — rain and all. There was spontaneous singing during the ceremony. There were bridesmaids with red umbrellas and groomsmen with mugs of microbrews. There were proud parents. There were family cookbooks for every guest. And there was an unlimited supply of love and laughter.

Signing off as Miss

Hello friends! This is my final post before becoming a MRS. I had wanted so much to share more details with you this week: centerpieces, signs, favors, sparklers, etc. But, not surprisingly, the week has just flown by.

A Tribute To Our Parents

Nick and I are both so fortunate to come from loving and supportive families. Our parents raised us to be kind, faithful, and respectful individuals. They have provided us with a solid foundation and have nurtured our independence. They are our role models and have set wonderful examples for us to follow â€“ in life, love, and marriage.

After Brian and I got engaged, we started talking about where and when we wanted to get married. I should note here that I moved around a lot growing up and thus donâ€™t have a â€œhometownâ€ where I would want to get married. We knew the wedding had to be in the fall or winter to avoid Brianâ€™s season, so we started thinking of places that would be nice that time of year. We initially talked about having the wedding in San Diego at Torrey Pines (my parents live in San Diego) – itâ€™s beautiful there and would have been a fun destination for our guests to visit. The one main drawback is that we would have been limited to only 100 guests and ultimately we decided that weâ€™d rather have more of our friends and family there than have it in California.

In case you haven’t noticed, I really love projects. Â Like, when I am faced with a life event, my mind immediately starts racing about what kind of projects I can do and usually the more complicated the better. Â See once I have an idea, it feels like a high at every phase from conception of the idea all the way until the project is finished. Â This is what happened when I decided to send out moving announcements for ourÂ new house.

Learning To Let Him Lead

I danced for ten years: ballet, tap, jazz … you name it, I did it. So I can count music, and I pick up steps quickly. I’m also inherently a coordinator, a motivator, and sometimes an over achiever. This combination makes me a natural leader on the dance floor. Enter: the issue.