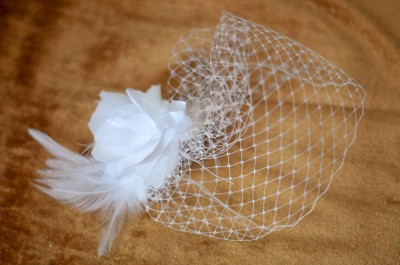 Hoorah! I finally finished my birdcage veil. It’s small because I didn’t want anything over my whole head and I didn’t want it to come down too far over my face either. I spent a lot of time with pieces of the netting, pinning them to my head with bobbypins and asking Garrett what he thought to make sure he wouldn’t hate it (because I want the person I’m marrying to like the way I look, afterall).

I goofed when I ordered the netting off of ebay and got ivory instead of white (my dress is white) so I decided to add a white accent to it. Hence the white flower, which I made with the help of a tutorial featured onÂ EAD. I bought some feathers from a hobby lobby for maybe $2? I have a lot of them left over. I used silky liner fabric for the flower because it was cheap and I liked the texture. That was $2 or so and I have a lot of it left over as well. The netting was about $15 for 3 yards. I only used about 20 or so inches, though I cut two other pieces first that were shorter and changed my mind. I bought some combs to attach it to, and ended up using one. I sewed the flower to it first, then the netting (the more difficult part) and then stuck the feathers in. 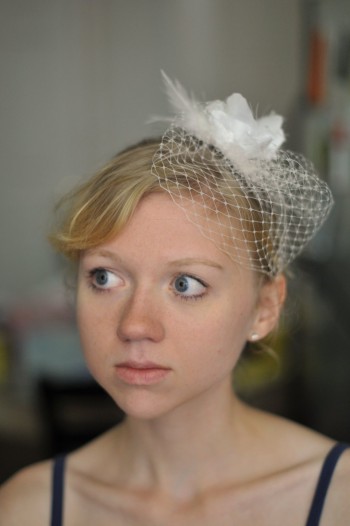 I secured it with gorilla glue (professional, I know) and the underneath looks like a crazy mess but it works and I really like it. I had to use a bobby pin to pin down the part closest to my ear so it wouldn’t stick up, but it’ll be simple the day of and I won’t be worried about placement because the rest of it is in place. I think it was a rewarding process, but I won’t be selling veils any time soon. I’d be willing to help people do theirs, but I’d want them to have a part in it.

So, what do you think?

There are few things more feminine than a perfectly tied bow! From veils to sashes to shoes, bows are truly a head-to-toe accessory. We adore them whichever way they’re used,Â so there’s no question why they’re our current crush for brides!

We have always been huge fans of Tessa Kimâ€™s accessory and veil collections, and after taking a peek at the 2013 lines and new intimates collection, we could not be moreÂ obsessed! Each beautiful headpiece, veil, and sash is both stunning and handmade. The intricate beadwork and flirty feather detailing is handcrafted so every bride receives a piece that is as unique as they are. With complementing garters and sashes, you’re sure to find the perfect ensemble for your wedding day! And last but definitely not least, the brand spankin’ new intimates collection is full of soft, silky loungewear with a modern mix of floral prints and soft blush tones. We are utterly in love and are sure you are too, so hop on over to the Tessa Kim website to see more! 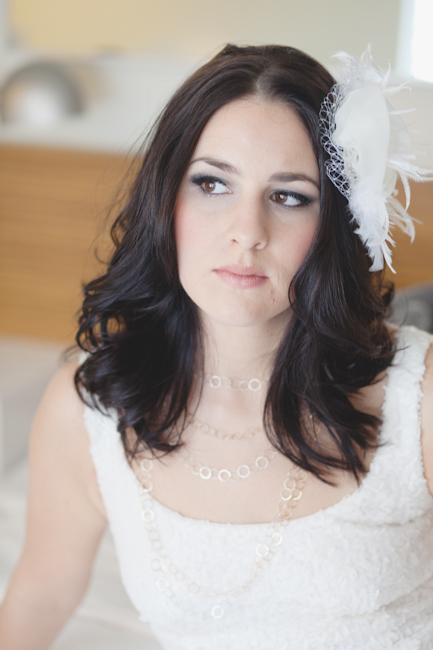 Happy Friday everyone!Â  I have another lovely Inspired Creations Contest shoot to show off today -Â modern and glamorous bridal fashion inspiration from the Portland team ofÂ Sara Gray Photography, Madeline Roosevelt,Â Amy Wing, andÂ Serephine.Â  The model is Sara’s beautiful younger sister Emily who is getting married this summer!Â  The team wanted to incorporate sparkle without going wild, so they kept to a neutral color palette of gold, ivory, white, and silver.Â  A sassy sequin dress from Nordstrom,Â glitter heels, dramatic makeup and fabulous accessories make this a perfect look for the modern bride. 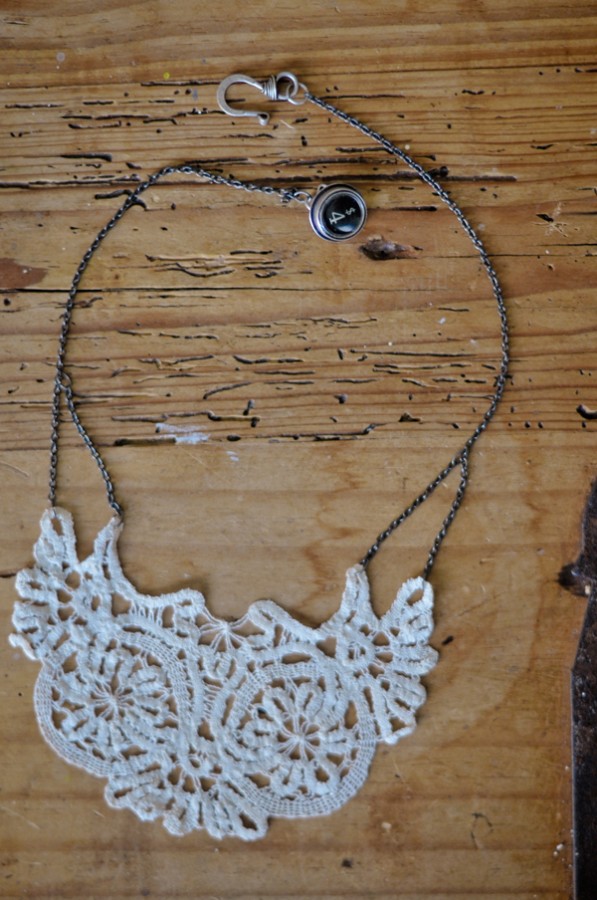 I love pretty lacy things, so I’m excited to share this fun and easy DIY project from Rebekah Murray!Â  Today, Rebekah is going to show us how to make a beautiful vintage doily necklace.Â  Follow along below, or download the printable instructions here.

Here is round 2 or our wedding projects! 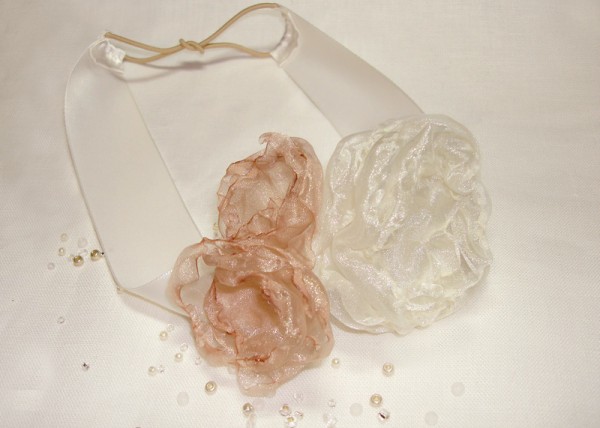 Mmmm. You already know I adore anything DIY and anything a little bit vintage.Â  So I definitely did a little happy dance when I saw this gorgeous lace and crochet scarf on With This Ring…

Hello, dear readers!Â  Sorry for the long break.Â  I’m getting ready to start up a business here in SoCal (DIY brides, let me know if you need a hand with DIY wedding flowers…it’s the basis of my biz!) so it’s been a bit crazy ’round here!

Peonies, DIY, jewelry, apparel…oh yes. This post has it all.

Amanda at the Vintage Glam blog is holding a DIY contest and posting some beautiful entries!Â  I am over the moon for these positively lovely DIY wristlets and boutonnieres made from artificial flowers and other ephemera.

We’ve been full of beautiful DIY headpieces lately (everyone should check out Briana’s amazing creation from last week).Â  I’m also loving this beauty created by Jamie of A Desert Fete.

Sundays! Sigh. Such a lovely day of the week. I’m missing my hubby this week…he is studying for his board exams and wasn’t able to come with me to Colorado. A perfect Sunday would usually consist of a relaxing morning…waking up with the sunshine, and heading to the farmer’s market to pick up some fresh figs, goat cheese, and honey. How great does that sound?

A Backyard Wedding shows us how to dye a petticoat – love the result as seen in her wedding!

All that Glitters is Gold

My original plan for bridesmaids gifts revolved around fantastic jewelry. I also have had a few other things safely nestled up my sleeve for months now, but jewelry was the focal point of what I wanted to give my girls. However, after we all fell in love with incredible bridesmaid dresses that cost a bit more than I had hoped, I decided to take care of the girls’ shoes to help reduce their financial obligations. In doing so, I vastly increased my budget for bridesmaid gifts, which gets pretty expensive times seven bridesmaids. Needless to say, I had to scale back the jewelry portion of their gifts, which seemed to be ok given my love for several incredible Etsy sellers. Specifically, in recent months I have really taken a liking to Mia Beads and this amazing necklace in particular.

Happy Thanksgiving everyone! I hope that no matter where you are or whether or not you celebrate the holiday that you are having a wonderful day!

One of the most tedious projects I undertook for my wedding also wound up being one of the most valuable because of what I learned.Â  You see, my mother became somewhat notorious for her slightly… ridiculous demands during the wedding.Â  One fateful night, she happened to call while I was over at my then-fiance’s apartment cooking him dinner.Â  Like usual, I put the phone on speakerphone (insurance for my sake, so he knew she was the one making the absurd demands and not me) and waited to see what was in store.

I tried to find matching dresses for my three friends, really I did. But the more I looked the more confused I was, and the less I felt qualified to decide for them. They are, as girls tend to be, quite different. In height, body type, and style. My maid of honor and I frequently shop together, and it’s a pretty solid rule that anything that works on her won’t on me, even if the size is right.