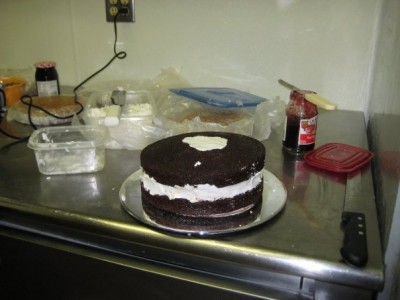 (photo by my sister, ashley merrill, while frosting cakes in a kitchen that reminded her of the shining)

Things didn’t go according to plan with our wedding. I feel/felt like it was a huge fail on my part, not dealing with stress well and not delegating or getting things done ahead of time. I’m a huge procrastinator and I also was so stressed about the other people involved in the wedding that I didn’t get focused. I’ve gotten over it for the most part, but I’m sure at least someone could learn from my mistakes. 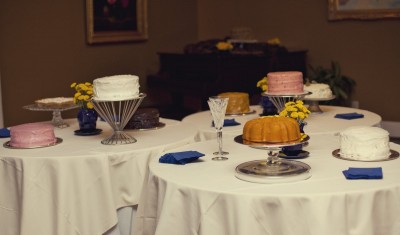 I wanted a cake buffet instead of just having one big cake, and I liked the idea of having homemade cakes instead of bakery cakes, because then they would mean something personal to us. The main problem with that is that it required work from people other than me. I wish I’d made them all myself two days before, taken them to our venue for them to have in their cooler, and been done with it. My sister makes an amazing cheesecake though and my mom and sister were willing to make cakes, freeze them, transport them from NC to AL, and frost them here.

Frosting them here was a disaster. We didn’t want to have to transport 10 frosted cakes to the venue because of all the potential for sliding and other disasters, but we couldn’t frost them there until the morning of. HUGE mistake. We should’ve just frosted the day before. Things like that always take longer than you think and I had other things going on later in the day. The cake buffet was still great, even though some bakery cakes got put out before all of the homemade cakes had been put out, and my friend/bridesmaid linden made a scrumptious cake that no one got to eat!

It made me feel bad because I wanted my family to enjoy the reception and they spent a lot of the weekend transporting things for me or icing cakes. I ended up making a key lime pie (my grandmother’s recipe), a white chocolate raspberry cake (and it turns out I’m bad at frosting cakes, haha), and a black magic cake (this is an amazing cake, dark chocolate lovers will love you for it). 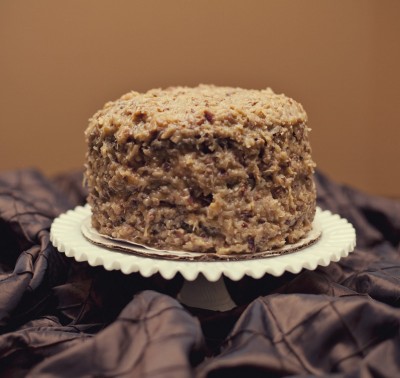 Garrett’s mom made a german chocolate cake for his groom’s cake which was so nice of her to do, and meant a lot to him since she makes it every year for his birthday. Plus, German Chocolate cake is delicious! 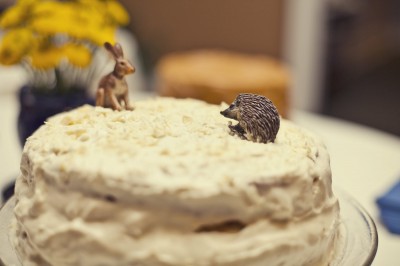 We added a hedgehog and hare to the top of the cake we cut, the white chocolate-raspberry that I made, which was a nearly the last minute idea of mine. I like cake toppers but hadn’t thought of anything inventive or cheap enough that would fit us. I was shooting an awesome trash the dress session and we went in a toy store and voila! Our randomly favorite animals that we used on our STDs. I was kinda worried Garrett wouldn’t like them because they were cheap plastic toys but he liked them a lot! 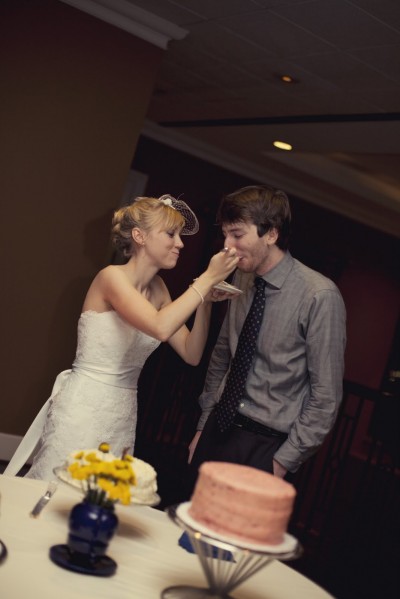 All’s well that ends well, and it was a fabulous party. Not that I wouldn’t change a few things if I could. 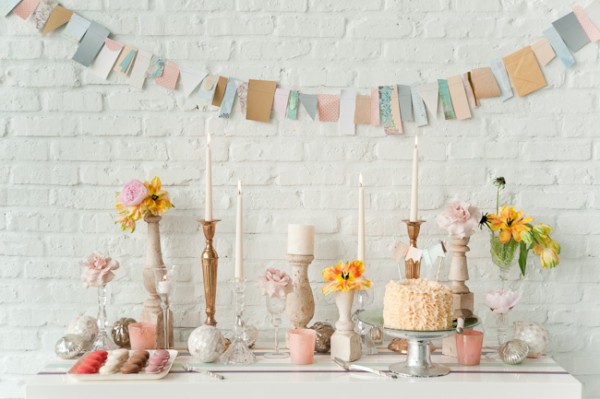 There is just so much pretty in this shoot, I’m over the moon!Â Kelly Maron Horvath of Paper Stories, Lauren LePine of Ryan Alexander Events, Lynn Fossbender of Pollen, Stevi Savage of AveryHouse, and Shannon Spellman of Plate have dazzled me with their interpretation of glitz and glam for the Inspired Creations Contest, it’s an absolute wonderland of handmade charm.Â Â Mercury glass accents, mother-of-pearl buttons, satin ribbons and gilded china from PlateÂ are just a few of the ways that the team incorporated glitter and glam into their tabletop and dessert display.Â  And since the Inspired Creations Contest is all about being fabulous on an approachable budget, everything from the sewn paper bunting toÂ the ribbon table runner, escort card holder, cake topper, and even the cake itself was created by Kelly, andÂ all of the decorative accentsÂ used in the shoot were brought in from the team’s homes and studios.Â 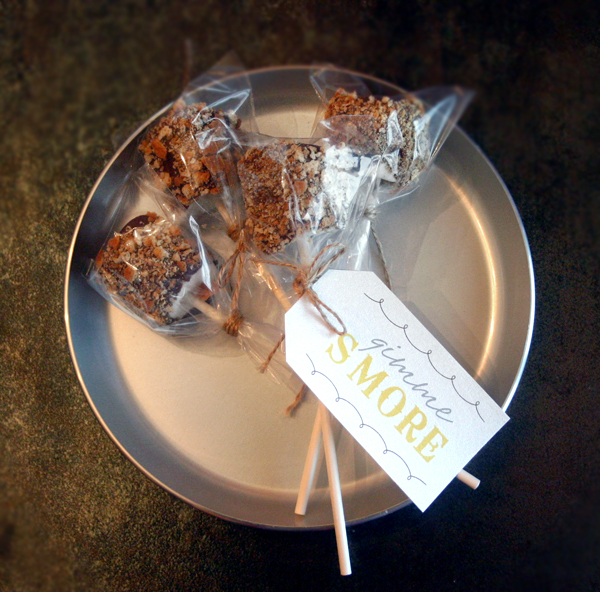 I love edible wedding and party favors, and Kelly Maron – mastermind behind Paper Stories and the hip Chicago bridal show Indie Wed – has stopped by EAD today to share her quick and easy how-to for S’mores on a Stick!Â  And even better, she has created three adorable printable tags for these goodies in two color palettes.Â  Print either the “Love on a Stick” or “Yum! Yum! Yum!” tags on sheets of label paper, and wrap around the S’more stick, or print the “Gimme S’more!” tag on cardstock, punch a hole, and attach to your S’more with decorative twine.Â  Voila – easy peasy S’mores favors!Â  Thanks Kelly for sharing! 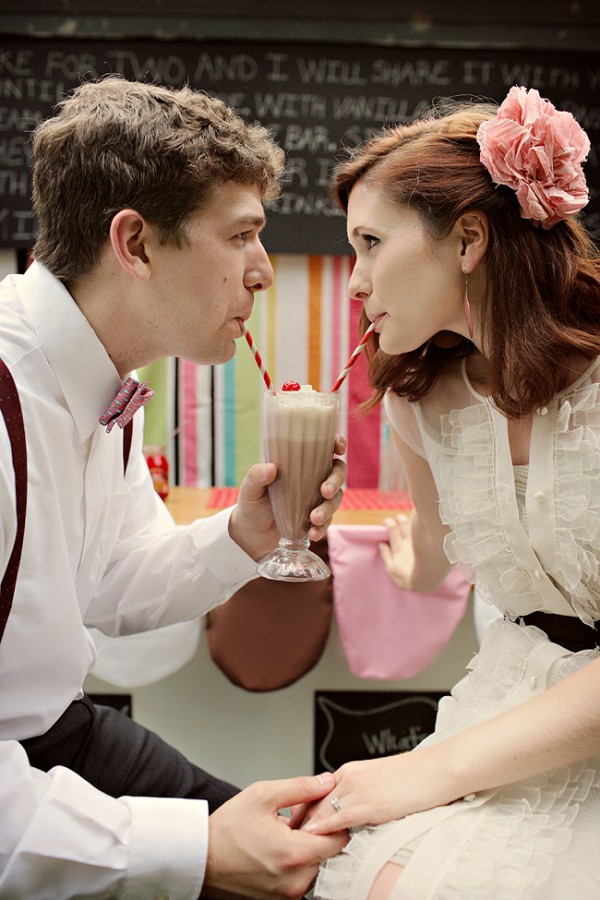 I’m not sure what’s cuter – this retro milkshake bar Inspired Creations Contest concept or the “models” for the shoot, Rachel and John. Kellie Kano and Elissa Keno did an incredible job constructing the milkshake bar and creating a retro look and feel sure to be perfect for any summer wedding reception! 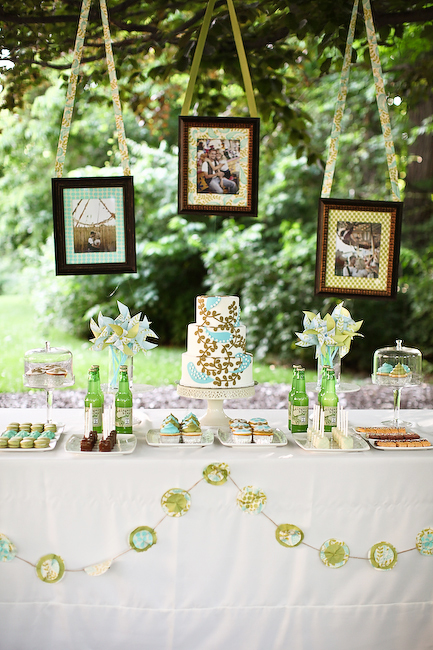 April put so much love and attention into the details of her Inspired by Fabric concept, and was kind enough to share all of the DIY project instructions with us!Â  All of these projects can be accomplished by DIY-ers of any skill level, and April truly shows that a wedding is not about the size of your pocketbook, but the size of your imagination!

Today we have not one, but TWO, innovative Inspired Creations Contest concepts from the lovely Tammy Golson!Â  The first showcases a fun (and yummy) escort card idea – cupcakes!

My Name is Christine, and I’m obsessed with Details.

The reception is by far the biggest component of most weddings as there are so many details that go into setting one apart from the next. And we could make no exception for ours. DIY was the name of the game for us, because well, I love detail! And because of the wedding blog world, I had a never-ending, sometimes extremely overwhelming source for inspiration and ideas. And I loved that this community could inspire such wonderful elements for my wedding. From the lace votives, to a â€œsweet loveâ€ candy bar to a wedding tree, these little details were what made our wedding so special.

How precious are these miniature pies baked right into jars?Â  They would be a wonderful wedding favor – or the perfect dessert for a picnic reception!

Pie on a stick? Yes please!

Une-Deux Senses brings us a quick and easy tutorial for making your own adorable cupcake flags!

When life hands you lemons…bake your wedding cake!

“Your good friend has just taken a piece of cake out of the garbage and eaten it. You will probably need this information when you check me into the Betty Crocker Clinic.â€
-Miranda, Sex and the City

Today’s DIY project is from My DIY Wedding Day.Â  Lori from Federico Designs shows us how to create a beautiful embellished cupcake tower!

(This may well be the first recipe ever on EAD Weddings!)Â  Chocolate truffles, perfect for your favors…Â  Yum.

I’m excited about today’s DIY project because it comes from our very own brand-spankin’-new-as-of-next-Monday weekly columnist Abby!Â  Abby is planning a Boston wedding for next year and here is one of her fun DIY projects, a wedding cake (for display only!).

Such a simple idea, but the result is absolutely precious!Â  Package your wedding cake to go using this MS template, as seen on Stephmodo, found via the ever-inspiring Black*Eiffel.

Planning this party was SO much fun! I threw as many Braves and baseball details in there as I could. You’ve already seen the centerpieces and seating chart – but we also had Braves wine adorning the bar (Chipper Chardonnay and McCann Merlot, natch), vintage Braves caps as decor, a Smoltz jersey for our “guest book”, and dessert was, of course, ice cream sundaes in mini Braves helmets. Braves highlight reels were playing on the 755 Club screens throughout the evening.

I love this idea!Â  Nicole created her own tiered dessert trays using thrifted plates and glasses.Â  They became the highlight of her dessert display!

Michelle wrote in with her super appetizing strawberry tree centerpieces!