Have you ever been to a co-ed bridal shower? I hadnâ€™t â€¦ until Saturday, and we were the guests of honor!

It was incredibly sweet of the parents of our best man (and pseudo parents to Nick since he was in fifth grade) to host the shower in northern Virginia. We traveled from Pennsylvania with my parents, my brother, my sister, and my sisterâ€™s boyfriend. Three of our six bridesmaids and four of our seven groomsmen made it to the party, as well as several parents of friends. (We really missed Nickâ€™s parents who werenâ€™t able to make the trip from California!) 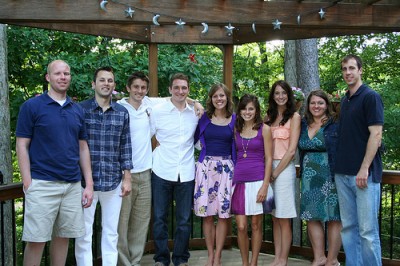 We had such a nice afternoon relaxing on the deck and drinking peach wine and summer brews with some of our favorite people. We enjoyed an assortment of dips and a cheese spread in the shape of a wedding cake. There were no entertaining bridal shower games (I donâ€™t think the boys would have survived), but there were some memorable moments during the opening of the gifts.

I got baking utensils (and flour) and Nick got grilling tools (and charcoal) from my brother. 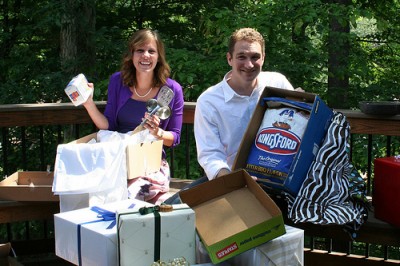 A request from my sister to bake every cupcake in the new Martha Stewart book. 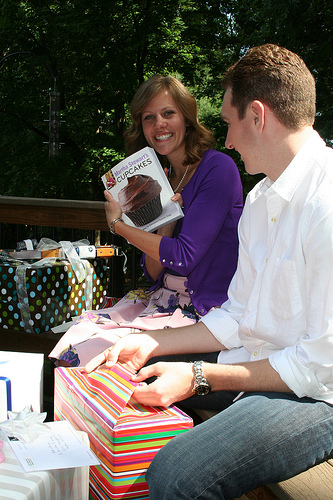 We got a handmade quilt for two. 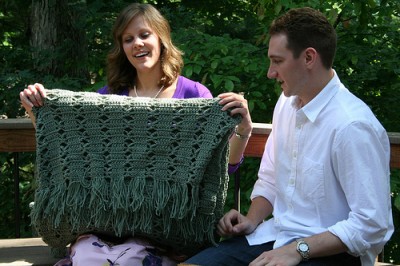 Then there was the hysterical love poem written by two of our groomsmen that included the lines: â€œRomeo and Juliet have nothing on you,â€ and “Roses are red, violets are blue, and other nice stuff like that.” They even cut out paper hearts. We surely wouldnâ€™t have received that during a traditional bridal shower! 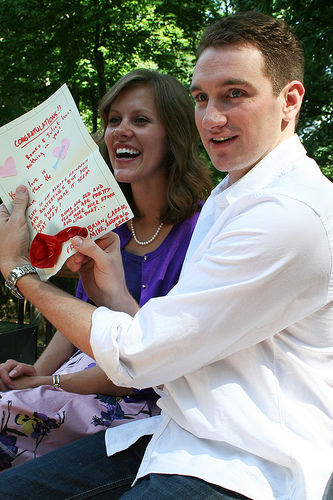 I donâ€™t think we stopped smiling for even one second that day. Especially when we opened the card from my parents that said, â€œCanâ€™t wait to see what you â€˜mixâ€™ up as Mr. and Mrs.!â€ My sister captured our expressions as we peeled back the wrapping paper to reveal our red KitchenAid stand mixer! 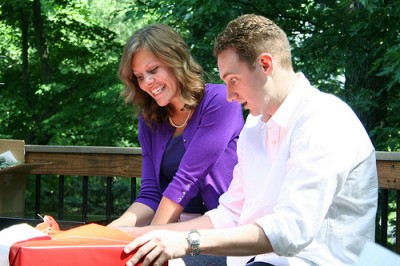 My parents had previously suggested we add some â€œmanlyâ€ items to our registry, but I think our faces show our shared excitement over kitchen appliances!

There were several traditions that struck Nick as odd, such as the bow bouquet. But he played along and posed with it anyway! 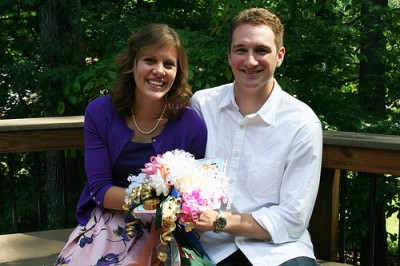 After the shower the wedding party changed into comfortable clothes and went to Top Golf for the rest of the evening. (Hopefully the boys weren’t too embarrassed that the bride-to-be beat them!)

This was the first official event in a month full of wedding activities. Nick’s bachelor party is this weekend, and my bridal shower/bachelorette party is at the end of the month. With just 80 days to go, things are starting to feel a bit more real!

What are your favorite ideas for a non-traditional bridal shower? 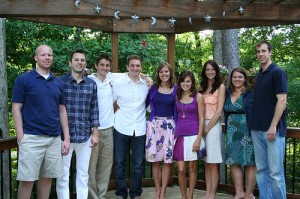 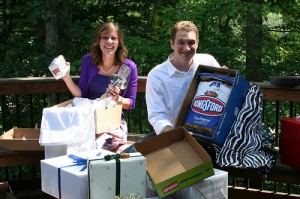 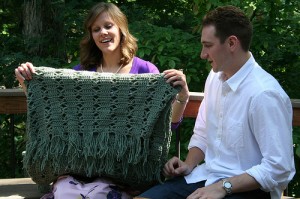 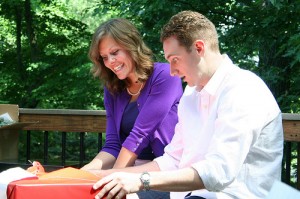 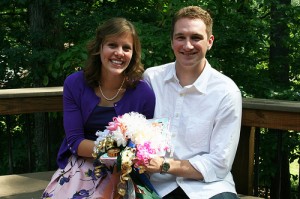 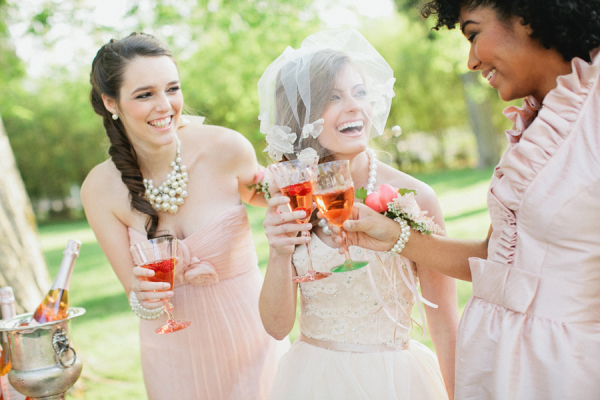 There is so much gorgeous inspiration in this collaboration shoot between Kristyn Hogan and the talented team at Historic Cedarwood, and we love it all! Amber Housley created the lovely floral stationery and helped direct the styling of this bridal party tea in the garden. Eclectic linens from Urban Outfitters ground the tables for a collection vintage dishware and vases on top, filled with bold blooms and some of the prettiest teacups weâ€™ve ever seen! The bridal party sipped pink Champagne from Le Grande Courtage while playing dress-up in amazing gowns fromÂ The Bride Room and accessories by Beatrice Couture Designs styled by Opulent Couturier. And aren’t you just in love with the playful side pony styled byÂ Jessica Jones? Run, don’t walk, to the gallery to soak up all of the inspiration! 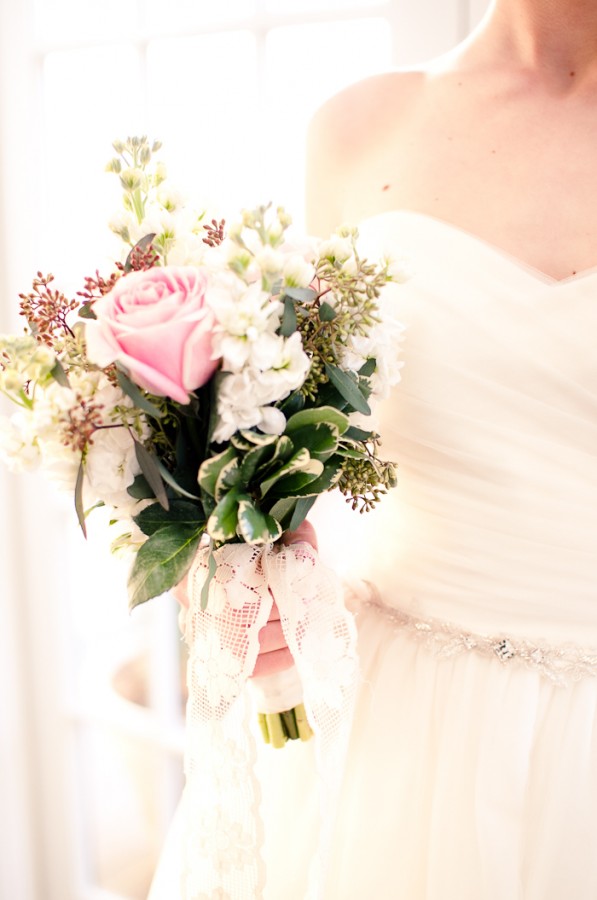 We have such a treat in store for you today! Phebe from Making Me Events sent over the most lovely shoot filled with vintage plates, ribbons, doilies, tea cups, sugar, spice, and everything nice. She has gathered over 1000 vintage and retro plates and has featured some of her favorites in this shoot. I love the delicately glam color palette of pinks and golds and seriously, how yummy do those macaroons look? The styling by Making Me Events is to die for and these photos by Henry Photographers are absolutely lovely! 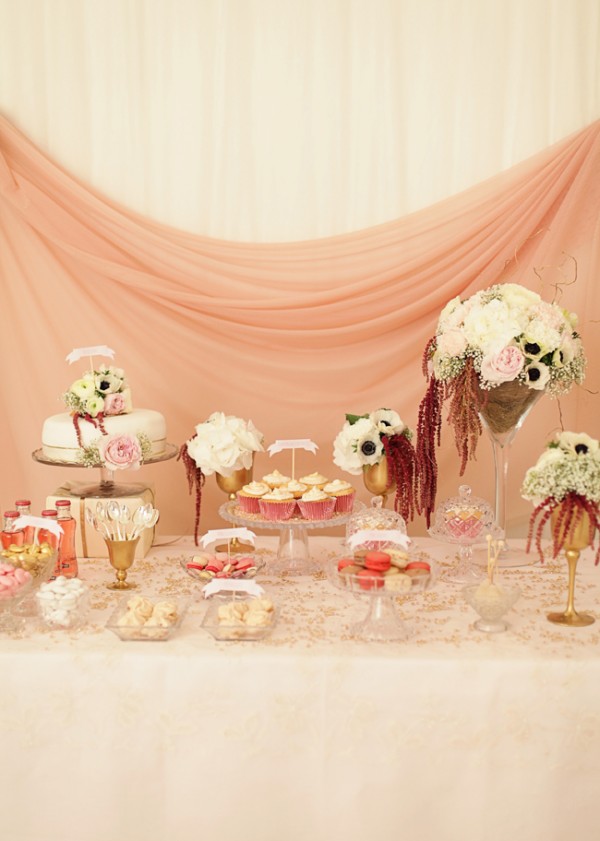 Glittery, frilly and romantic, this pink and gold bridal shower Inspired Creations concept from the Italian wedding planning gurus Bon Bon Studio (Laura Bravi of tren di nozze, Alessandra Aghilar of Almaluâ€™s Place, Federica Piccinini of Sweet As a Candy, and Gaia Borzicchi of Aliceâ€™s Adventures in Wonderland) is perfect for the bride-to-be who loves all things feminine and glam.Â  Frothy tulle, ribbons, and sequins are present in abundance!

This past weekend was my bridal shower hosted by my mom, Brooke and the bridesmaids. They sure did throw a beautiful shower, I feel so loved!

In the waning days of summer, these images gave me a much-needed dose of sunshine!Â  Carolyn Brandhorst, owner of The Papery of Philadelphia, threw this gorgeous bridal shower for her future daughter-in-law, Katie.Â  Styled by Evantine Design and photographed by Laura Novak, the lovely shower was held in the picturesque courtyard of Philadelphia’s historic Morris House Hotel and featured beautiful paper goods from Carolyn’s shop.

I had the most amazing bridal shower ever at Crown and Crumpet. We were lucky and had gorgeous weather in San Francisco for the occasion. It was a small party of close friends and some relatives, and we celebrated while drinking four types of tea (chocolate mint, strawberry green, fruity decaffeinated, and ginger oolong) eating tea sandwiches and treats, Â and soaking in the adorableness that is Crown and Crumpet! Everything in there was pink and frilly, I LOVED IT. So, I took a lot of photos and it was very difficult to edit them down for this post, but I hope you enjoy this small sampling of the day!

We knew it was coming, just not when, where, how, or what.

Mail That Makes Me Smile

Today I received an invitation–to a party for me! It is for my bridal shower, which will be at Crown and Crumpet in San Francisco.

My mother and sister hosted me a beautiful bridal shower this past weekend at the Peninsula in Chicago. Â It was a reflection of the hostesses: classy, fashionable and personal.

Oh man…where did the time go?!Â  Sorry for my absence…wedding planning and life just sorta took over!!Â  But alas…I am back and full of fun stuff to tell you about!

I won’t be having a traditional bridal shower, instead we’ve requested to have a shower for the both of us together…I think it’s called a Jack and Jill shower? I’m not one to play all the shower games and I haven’t felt comfortable opening up multiple presents in front of lots of people since I was in elementary school. Having Mr. there will be a lot of fun and will help take some of the attention away from just me…and also, is it bad that I don’t want to be in a room with all his family by myself yet?

Is it October already?

I am in total shock that my wedding is just about a month away – where did the time go? September was a total blur – starting with a last minute trip to Paris (I know, pretty amazing), followed closely by my bachelorette and Homecoming at Davidson. Then I had two fabulous showers in Brian’s hometown, and then a work trip to Chicago! And do you think I managed to get any wedding planning in during that time? No. I got back to my real life and had a melt down because of everything there is still left to do…

I am surrounded by some amazingly generous women who have showered me with love and affection (and lots of sugar!) at two recent bridal showers.Â  The first, hosted by my bridesmaids, was the last weekend in July and the second, hosted by my co-workers,Â was just last week.Â  Though I’m not big on being the center of attention (despite the fact that I’m an only child AND a Leo), I had a blast at both showers.

I put together a little thank you for each of my bridal shower hostesses. They wouldnâ€™t let me help with anything at all, so I went shopping.

DJâ€™s mom hosted a bridal shower for me on a rainy Saturday, with help from my maid of honor and one bridesmaid.

I absolutely LOVE when bridal showers or bachelorette parties have a project, craft or activity. Â This love does not extend to games, because, lets face it-bridal shower games are pretty horrific for the most part.

Fellow brides to be out there, have you noticed that along with all the various wedding-related festivities comes the pressure to buy new clothes? Lots and lots of new clothes?

Around the Clock Bridal Shower

Looking for a unique bridal shower theme? Well, I have one for you … Around the Clock! Last Saturday my beautiful bridesmaids hosted a fabulous shower for me, using the same theme from my mother’s shower 30 years ago. Every detail was so carefully chosen and perfectly fit my personality. I feel so lucky and so loved!

A Sweet Occasion – My Bridal Shower!

In early May, my bridesmaids hosted an incredible bridal shower for me. While I’ve been getting increasingly more excited for the wedding in recent months, excitement really started to mount with the shower the girls hosted for me and all of my family and friends. They put so much effort into making it a wonderful day and it truly was just that.